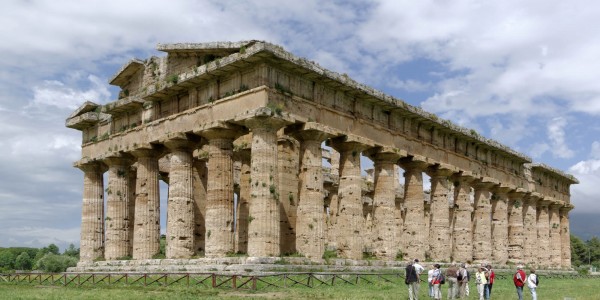 The most beautiful city of magna grecia
Our tour will take you to discover one of the most precious archaeological gems of italy; it’s known world over for its spectacular and very well preserved doric temples.
Founded by greek colonies moved from the further south city of sibari in the 5th century bc: after explored the plain of sele river they assured themselves to fortify a town near the shore line. The first name given was poseidonia in honour to the god of the sea.

Defended by its imposing and continuously reiforced walls ( nowadays the best preserved of ancient times ) with 4 gates at cardinal points and thanks to its geographical position - close to tradeways, poseidonia soon reached a high degree of richness and of artistic and cultural fervour which in a century lead to the construction of 3 magnificient doric temples, an incomparable inheritance from greek civilization.
The 3 doric temples from the 5th century bc are the marvels of this archaeological park, as they stand majestically on the plains in front of the sea: the temple of neptune, the basilica and the temple of cerere. The first two are tied to the cult of hera ( zeus’ wife ).

When the romans came in that place, they changed the name in paestum. In the area of the roman city, apart from the capitolium, they are other significant remains: the forum, the amphitheater and the remains of various religious structures.
Not far from the excavations there is the archaeological museum of paestum, home to some of the most important works in southern italy.
The most important are the frescoes from the 5th century bc tomb of the diver. The sculptured metopes are important decorative elements of the temples, as are the frescoes from the 4th century lucanian tombs, with the typical “ return of the warrior “ scenes.

The plain of paestum is not only known for its archaeological wonder but also for food. One of the most appreciated local product is the worldwide famous buffalo mozzarella. We will join one of the local buffalo farm to watch and enjoy from local dairy the way of how the mozzarella is made.