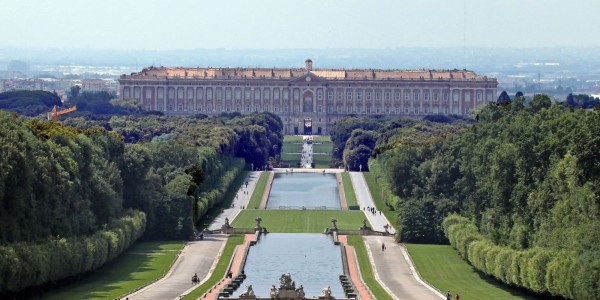 The tour of Caserta give you the chance to see the wide royal site together with one of the better preserved medieval town of our country.

The plain of Caserta open onto th sea and host the widely and sumptuous palace ever built for a king. Middle of the 17 hundrends king charles iii of bourbon engaged the architect Luigi Vanvitelli to design a palace that could compete with great residences of the other european sovereigns, in partuicular Versailles.

This immense construction is made up with four courtyards, 1200 rooms, 34 staitways, chapels, gallery, museums and theaters plus more than 120 hectar park with wide boulevards, fountains, waterfalls and many other constructions.

From the entrance atrium you can admire the four courtyards with their park views. From the honour stairway you can arrive directly in the front of the palatina chapel, a rectangular hall with its barrel vaulted caisson ceiling. To the left of the chapel, the royal apartments decorated with marble and paintings and precious arts.The gallery of the palace is a picture collections of kings and queens of the boubon royal family. The little court theatre built in a horse shoe form is a masterpiece of theatrical architecture

If the royal palace of Caserta is an exultation of architecture and decor, its park complete the marvel. The majestic fountains with plays of water is mixed with lush and green that disappears into the horizon.
The two mile of gardens then makes a powerful impact to your eyes ends in a great waterfall called fountain of diane. The english garden it is rich of rare exotic plants, greenhouses and paths.
An unforgettable visit to the medieval Caserta will take you back through time amid little stone paved streets, aristocratic buildings and ancient churches and old traditions and old recipies which have increased the local culinary art are still deeply felt.