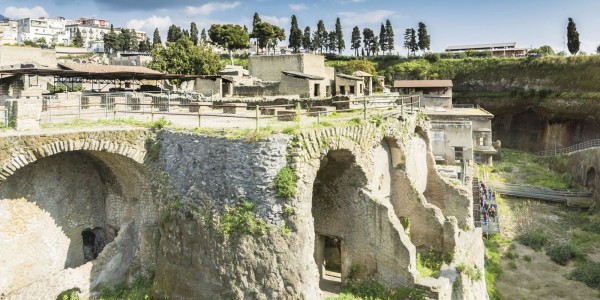 A city in the of the earth
Herculaneum was an ancient roman town, an holiday village by the sea for wealthy roman aristocrats, where they enjoyed their vacations, as testmonied by the sumptuos villas by sea. Also famous for the fishing and suggestive vineyards, as pompei, the apocalyptic explosion of mount vesuvius of the 24th of august 79 a.d didn’t spare herculaneum either. It was buried and destroyed as well as pompeii was but in a different way.
As a matter of fact volcaninc ashes didn’t fall on the town but it was submerged by 25 meters of thick layer of mud and lava and hit by a such high temperatures blast that it carbonised items in the city, this is why we can admire houses almost intact and see highly degradable materials like wood, furniture and papyrus. Walk along the streets, paved with vesuvius lava rock or limestone, they outline the charateristic roman urban palnning with decumanus and cardinis forming the insulae, is a unique sensation
Today in herculaneum is possible to admire incredibly well adorned houses, with amazing frescoes that will enchat you and bring you back to the art of the ancient romans. One of the most beautiful is the house with mosaic atrium with black and white pavement. The house of deer with statues of deers attacked by dogs of the satyr with goatskin and a drunken hercules were also found. To not be missed are public thermal spas of the forums. The house of neptune and amphitrite with its shop ( the most well preserved ) and the nicest mosaics of the town. Following the decumanus maximus, it is possible to go across the city wall and admire the suburban thermal spas.
The site offer to its visitors also the possibility to reach the ancient beach where most of the people lost thier life burned by the high temperature of pyroclastic flow that came down from the slopes of mount vesuvius
Nearby, in the area we will take a lunch in a local winery that allows you to discover the typical flavors and wines of naples region